The tavern is a place for adventurers, you can complete quests here and drink a beer. Have you drunk too much? You can use the toilet if you have toilet that is ... You can also play with the gambler here and go for a city guard. 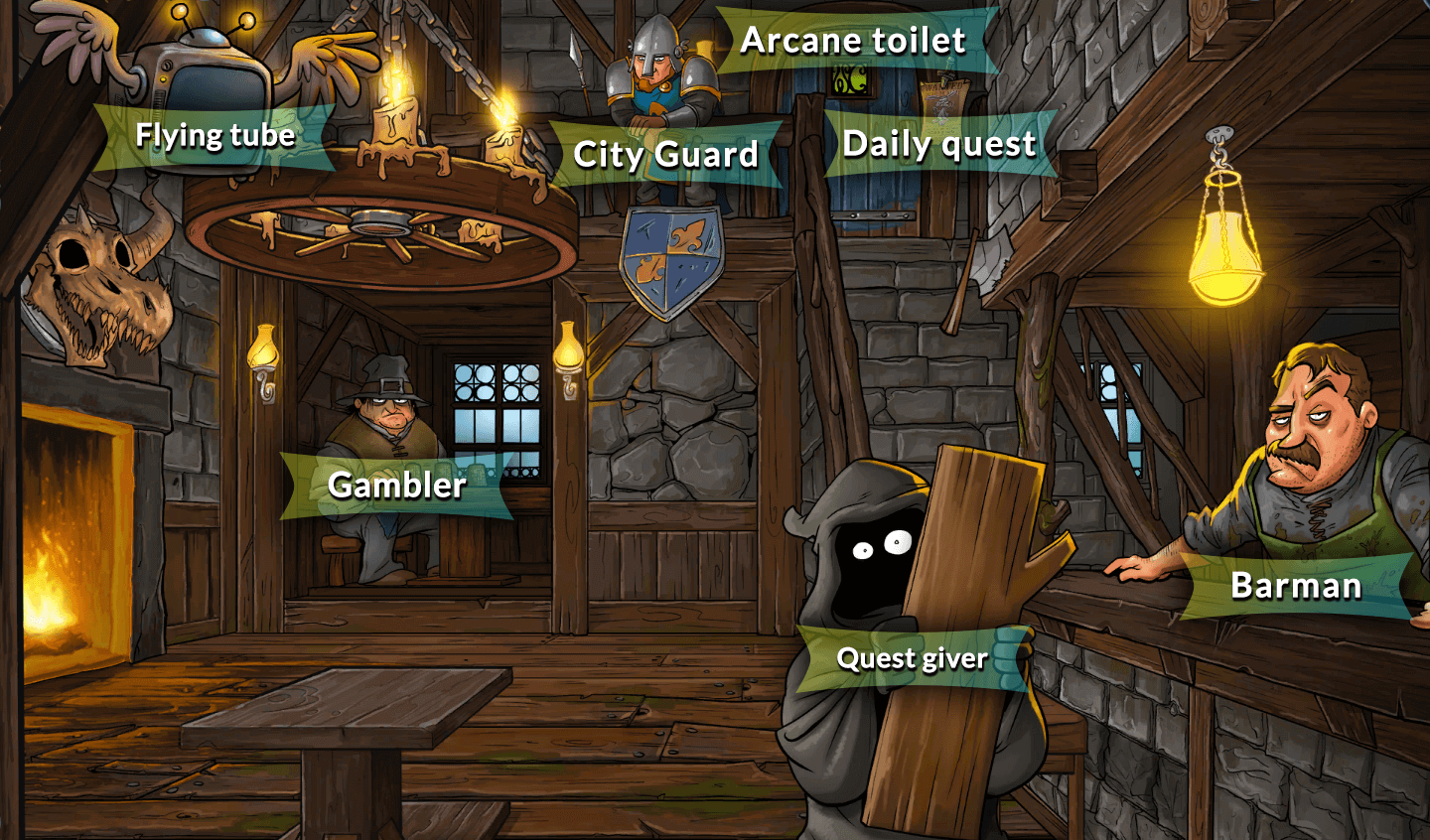 In the tavern, there are quest givers who have 3 tasks to choose from, they differ in time and rewards. The basic rewards are gold and experience, but there are also rewards in the form of items, mushrooms and resources.

(except for the Oktoberfest event - then you can drink it for free). Of course, you can't drink indefinitely ... the daily limit of beers is 10, which, together with the basic daily adventurer, gives us 300 points. You can also get enchantment from Witch that gives you additional free beer, so with that enchantment you can use 120 thirst, and 320 by using shrooms.

You can skip quest in multiple ways:

This calculator will help you choose the most profitable quest in terms of gold or XP. Enter the time of the task below in the form of min:sec, amount of XP and gold for the task. The script will process these values and choose the best of them.

Every weekend or during the holidays, various events are organized thanks to which players have various bonuses like shorter quests or higher chance for epic items. Check out the details of the new, rebuilt events in this article.

City guard is one of the many sources of gold in Shakes & Fidget, so it's worth setting it up every day (especially when you have a magic mirror). You get a certain amount of gold for each hour of city guard. That gold amount scales up with character's level. You get gold only after the end of the guard, so if you cancel the guard, you won't get gold for it. Below is a table with gold values for a given level.

Remember to set up city guard ten hours before the start of the Glorious Gold Galore event, so after midnight you will be able to collect 5 times the amount of gold!

At the gambler, you can play 2 games where you can win (or lose) some gold, mushrooms or other resources.

The gambler puts the ball into one of the three cups and then swaps the cups several times and your task is to guess where the ball is. This is obviously a game of chance so there is no way to win for sure. In this game, you can play for gold or mushrooms.

When playing three cups game, you don't have to wait for the gambler to finish shuffling the cups, you can skip the animation by clicking anywhere in the game window. A useful trick when, for example, you want to quickly complete one of daily missions.

The game of dice is available after unlocking the pets and the Tower. The gambler rolls the dice twice, the first time you choose dice with symbol of reward you want to win, on the second roll you can get the reward, provided that you have 3 or more dice with the same symbol. In the game, you can win one of the following: gold, wood, stone, souls, crystals and hourglasses. The more dice with the same symbol, the better the reward. You can play dice 10 times a day, but you have to wait an hour to play again, and if you don't want to wait - you can use the hourglass to play again.

In the table below you can check what you can win depending how many dice you have with same symbol.

* - only during Epic Good Luck Extravaganza

As in the case of the game of three cups, the animation of rolling dice can also be skipped here.

The Arcane Toilet is a place where you can drop items in order to obtain epic items as well as aura levels. You can enter it only after finding the key, and it can be dropped from the mission, provided that you have a character level of 100 or higher. 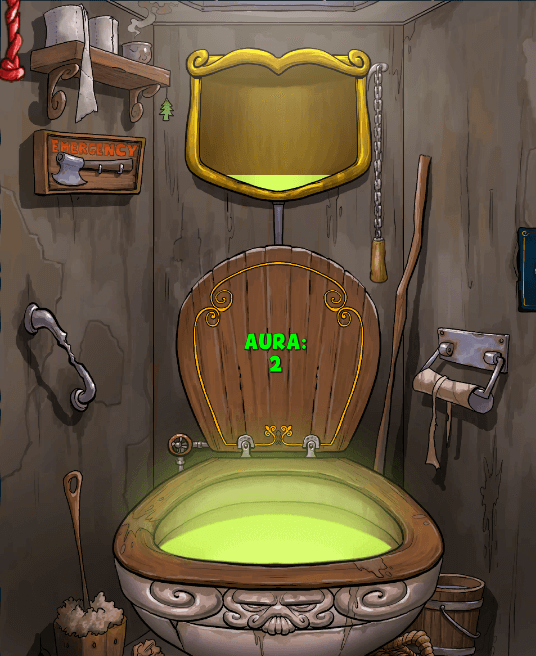 Each time you throw an item into the toilet, you get it back, but its profession and stats will change randomly - for example, if you throw a mage's staff with strength, you can receive a scout's bow with dexterity. This is useful when you want to equip your companions. You can also throw legendary artifacts into the toilet, with the difference that toilew will only return weapons (you also have 33% to receive a shield instead of a weapon). As for items from "valuables" category, it also returns with randomly changed stats, but the profession will not change because the valuables is universal - it fits any profession. You can also throw in items such as potions or gems dug out of the mine, these items will not be returned in any form. Every day, for the first item you put in the toilet, you receive mana points, depending on the type of item.

The table below shows the amount of mana points you can get for different items.

When the toilet is full you will be able to pull the flush and receive an item with it, and if you are lucky, you can also get an epic item! In addition to the item, the level of the toilet's aura will also increase, and with it, the amount of mana needed to fill the toilet.

In the table below you can see how many mana points are needed to fill the toilet at a specific aura level.

Maximum level of toilet is 66.

Mission of the day

After reaching character level 10, every day (with the exception of some events) a daily mission appears in the tavern, for which you get a certain amount of xp. Below is a list of missions you can get:

It is known that there are only commercials on TV ;) and it couldn't be different in Shakes & Fidget. However, here you can earn get lucky coins for watching ads, which you can later use at Dr. Abawuwu as payment for the spin of the Wheel of Fortune (one spin costs 10 lucky coins). As for the amount of lucky coins for viewing ads - there is no fixed value here, however you usually get 1-5 coins for each ad.