The arena manager is the place where you get the runes. To start earning runes, you need to buy and upgrade more "attractions". Each of the attractions generates money that you can spend on further improvements. Over time, attractions also generate runes that you can get after restarting the arena progress, which means resetting money and attraction improvements. However, the saved runes are added to our account and these give a bonus of + 5% arena revenues for each rune. After acquiring 1000 runes, you will be able to find items with runic bonuses, the more runes you have - the better the bonuses.

How to unlock arena manager?

You will automatically get access to the arena manager at level 105.

How to build up arena?

To quickly get the opportunity to find the best runes, you'll need a good way to upgrade individual attractions. You also need to know when to reset arena progress. One of the key things is to upgrade attractions to the "borderlines" where the money generation cycle is decreasing, which increases the effectiveness of the arena. These levels are as follows: 25 -> 50 -> 100 -> 250 -> 500 -> 1000 -> 2500 ->. The main priority when it comes to upgrading are the last 2 attractions - Marauding Monsters and the Toilet, because they generate us about 90% total money. These 2 attractions are also a priority if we want to buy upgrades from the merchant, which you can read about a little further. As for resetting arena progress in the early stage of arena development (so we have few runes on the left), there are 2 strategies, one of them is to reset your progress when you have collected on the right about 20% of the runes on the left, while the second strategy is to reset the arena with twice as many runes on the right side as on the left side. In the later stage of the arena development, when we can already buy the last attraction Toilet, it is recommended to reset the arena every 1-4 cycles attractions, depending on how often we log into the game. For example, if the Toilets cycle lasts 2 hours, it is after this time that thus generating money from this cycle, we can reset the arena.

There are over a dozen different runes available in the game, some of which will be better, e.g. for missions in tavern, others will increase our strength in the dungeons, and others will be useful in PVP combat.

Another type of runes are the ones that are generally useful. The first one increases the chance of finding an epic item, which will be effective during the Epic Shopping Spree Extravaganza event. The second rune - "improved item quality", acts as an additional Aura levels in the WC (each rune point is one aura level), thanks to which we can find e.g. weapon with better damage in the Armory.

The last type of runes are those that will be useful in general for PVP as well as for dungeons (especially some of them). Increased hit points is one of universal runes, it helps basically everywhere. Some of other runes give increased damage from elements (fire, cold, lightning), as well as resistance to these elements. These runes are useful in both PVP and dungeons. There is, however, an important detail regarding elemets. Some monsters from dungeons: Mount Olympus and Nordic gods in regular dungeons deal elemental damage and are also resistant to elemental damage, therefore, the effective choice would be equipment with elemental resistance and weapons with elemental bonus damage different than monster resistance element. The situation is similar with those dungeons in the Shadow world. The last rune is the combined resistance that can replace resistance to all elements, but remember that if you want to have, for example, a total resistance of 75%, then you need 3 items with a 25% rune, because there is a limit of this rune in one item, while the limit of a rune with resistance to a single element is 75%.

In the table below you can see runes, their bonuses, and overall bonuses.

An important fact about runes, as well as the amount of bonuses, is the fact that if we can find items with runes, each acquired epic item will always have a rune, while regular items only have a certain chance of a rune. Also, run bonuses in regular items can be up to half of the bonus limit. For example, if the bonus for the "Bonus to gold" rune is + 50%, you can find a rune with such a bonus in an epic item, while in an ordinary item you can find a rune with a + 25% bonus.

The merchant appears with his offer every 20 hours from the moment of purchase, or when 2 hours pass from the moment of his appearance. You can buy permanent bonuses for arena attractions for mushrooms (you do not lose them when you reset the arena progress).

If the appearance of the merchant is, for example, at 4 am, he will wait until you log into the game, so the 2 hours of his offer will be counted from the moment of logging into the game.

The bonuses we can buy are as follows:

The cost of money and speed bonuses is 25

for the first purchase for a given attraction, and with each bonus level the price increases by another 25

For players that are not shroomes there is recommended to buy at least 1st upgrades of each (speed and money), for 2 last arena attractions, since they generate the most profit on the arena, and make arena develop faster.

In addition to permanent bonuses, the merchant can also offer the so-called time skipping in 3 variants: 1 day, 3 days, 7 days (the most profitable option). It works in such a way that we get money and runes that would be generated in a given period of time. Buying skipping time is recommended mainly in the later stages of the arena development, and with the maximum levels of attractions at a given moment.

You can see some of the bonuses on the screenshot below: 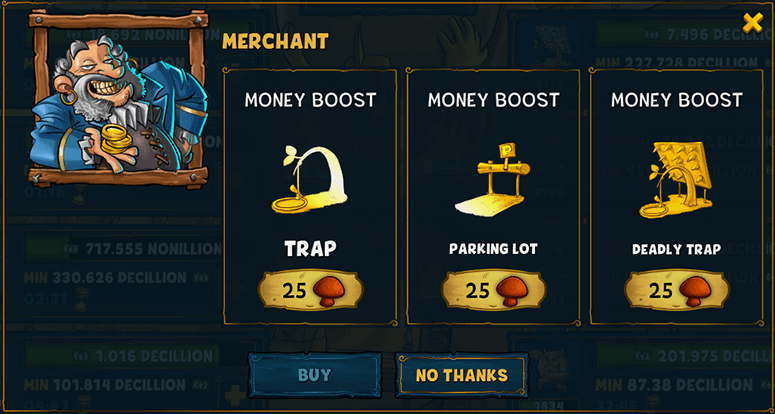